For most street artists, it takes a considerable amount of time to paint large art installments on the walls of urban structures. The more time it takes, the better chance there is of getting caught, since nearly all of the rogue artwork is slapped on the sides of city and privately owned buildings.

So, being a great street artist isn't just about having a creative mind, it's about having a criminal mind, one dependent on knowing the opportune hit time, along with knowing how best to evade local law enforcement and property owners. Even masters like Banksy and Shepard Fairey are at risk of legal action if apprehended in the act, which makes street art a dangerous game.

However, one group has developed a way to paint their rogue artwork in a blink of an eye using a huge 3.1-ton paintball machine that fires up to 840 paintballs at the same time, in just one eighth of a second. It drastically lessens the chance of getting caught, with the whole act taking less than a minute. But this beastly graffiti contraption was created as a marketing stunt for V Energy, a popular energy drink in Australia and New Zealand.

The gun consists of 840 steel barrels, each almost 2 feet long, welded to two 8mm thick steel plates and connected to 840 meters worth of rubber tubing. Each barrel fires with 90 psi, exerting 1 ton of force, thanks to the large 8,226-liter air tank. 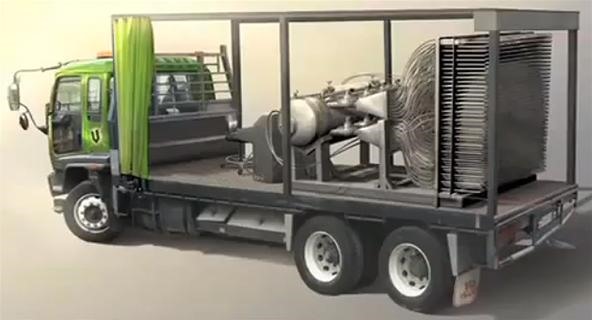 Since this is a huge marketing endeavor, it's unlikely that an illegal activity took place, meaning they probably got permission to splatter their Humpty Dumpty artwork. So, I wouldn't exactly call these guys street artists. Maybe street advertisers. And the large logo on the side of the truck doesn't make it any less commercial. But the fact remains that this is a super cool method of lightning fast art installments on the walls of urban blight.

The campaign is called Starts with V, which also has an interactive website with a virtual paintball machine that lets users shoot their own street art designs. Pretty interesting and fun, if you can stand the load times.

But the Republic of V team wasn't the first to implement instant paintball art; Jamie Hyneman and Adam Savage from MythBusters used a 1,100-barrel paintball cannon to create a paintballed Mona Lisa in 80 milliseconds during NVIDIA's NVISION Show back in 2008.

Who knows, maybe we'll see some true rogue artwork shot out of paintball barrels from the side of moving truck someday. Maybe far, far into the future, it'll be small, hovering discs à la They Live who get to garnish our city walls with pixelized artwork.

I wouldnt say it lessens the chances of getting caught, but it is a cool doohicky.

Tailgators may reconsider their distance when the back opens up.