Although most religions have inspired a variety of art, Buddhism seems to have a special relationship with the arts. Something about the endless circle of birth and rebirth seems to intrigue the minds of artists. Of course even if the art is not directly related to Buddhism, the Buddha has always been a fan of art. The Buddha has been quoted several times speaking about art, and most of his sayings are truly profound:

"Life is the art of drawing without an eraser." -The Buddha

"What we are today comes from our thoughts of yesterday, and our present thoughts build our life of tomorrow: Our life is the creation of our mind." -The Buddha 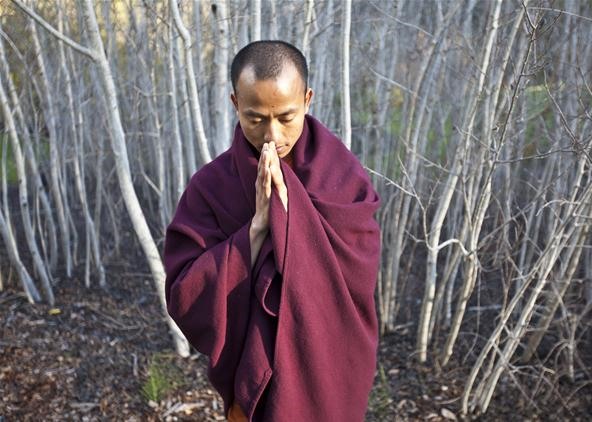 The beauty of the Buddha's words are not even lost on Myself, extremely distant from any place that the Buddha would ever have set foot in by thousands of miles, and two oceans. It is very easy to see that the Buddha was a friend to artists, both those who worked with traditional media and those of us who chose to pursue more contemporary forms of expression. Namely, street art and Graffiti.

I also like to think that the Buddha, who was so keen on using stories to spread his philosophy as a way to avoid getting caught by the oppressive authorities, would approve of this underground propaganda system. I would like to think that the Buddha would also approve of street art that expresses the needs of a Buddhist country in turmoil, its people caught in the middle of one of the longest and bloodiest civil wars ever.

The smallish country is wedged between the east end of India and west end of Thailand. It is predominately Buddhist (89%), and the culture (and art) is irreversibly intertwined with its religion. The Burmese struggle and civil war has been ignored by the mainstream western media for an obscene amount of time, brushed to the side in a world that couldn't care less about this small nation. However, this civil war, and the roles that Buddhism and street art play in it, are planned to be captured by a small indie film studio sometime next year.

Breadtruck Films is currently in the beginning stages of making a documentary that discusses the role of graffiti in the Burmese civil war. The film is titled "Art As A Weapon" and is the San Diego based studio's biggest project to date. The director, Jeffery Durkin, plans to fly out to Burma at some point next year to start shooting—IF the project gets funded in time. The film currently has a page up on Kickstarter and need more donations if it has any chance of being made.

The main focus of the film will be around street art and the role it plays in the political spectrum, especially around topics of religion. The film is being backed by Shepard Fairey, who designed most of the art for the projects promotion. Mr. Fairey has also featured it on his blog, where he stresses the need for such a documentary.

"Art As A Weapon" still needs funding, and there is very little time left. Any contribution helps and the link to the Kickstarter page can be found below. It's a great way to support film, and raise awareness about an important subject that most of the Western world has turned a blind eye towards.

Looks like a fantastic project to be involved in. What have you been doing with them, Henry?

I will be a gopher/anything they need kind of guy :-) along with that im writing most of the lit that we are distributing as well :-) Thanks for the support!

Thanks for sharing this with us, Henry. Sounds like a really inspiring project.

Thank you yumi :-) Glad you liked it

Wow I'm always a fan of war and human rights journalism, it's even more inspiring when street art is involved. Thanks for the post Henry I'd love to watch this.

Jeff - Thank you for responding to my concerns. Again, you all seem like good people. And I would like to take you at your word. But it all seems a bit too convenient.
In an age where even kids GOOGLE names. A simple Google of Art As A Weapon (BEFORE) you began your project would have yielded did you mean ART IS MY WEAPON?
And the Images search would have yielded my LOGO.

But once you were made aware. Apology noted. You continued to use it. And to add insult to injury,
You continue your fundraising efforts using imagery, wording that draws on, dilutes and diminishes detracts from OUR message, that art is MY message, a personal empowerment to find creative Nonviolent ways to work for peace and humanity - NOT just in BURMA, but here at home and throughout the world.

1. It makes it harder for me to Launch a vehicle to tell OUR STORY, as it will or could be conceived that WE, are now copying YOU.
2. Future fund raising attempt on our part could be hampered, as others may feel they already gave to us. or That our efforts are somehow an attempt to profit off ART AS A WEAPON.
3. The core of Democracy that we cherish, that so many other dont have is FREE SPEECH. Yet, your site has deleted and removed opinions/comments that criticize or are against what you have done.
What ever happened to a fair an open debate or discussion. A one sided story, seems to be what I (we) have been fighting against. I've used my art to show others that their small voice, even the voice of a nobody like me matters. Yet you chose to silence the voice of the people who spoke in opposition to you. Just what kind of freedom is that?

YOU are correct, that I am too close to this. I am very close to this. I don't think you a real grasp as to how far reaching the ART IS MY WEAPON message has been.Mentoring Inner City Kids, Speaking out against Homophobia and Hate Crimes, Visiting Nursing Homes, GIVING COMPUTERS to Inner City Artists, Housing The Homeless in my home. Including young Artists in my exhib

As much as i would like to respond to your comment, i am simply an intern, however i will pass your concerns and your comment in its entirety along to jeff. Thank ou in advance and i hope this gets worked out.