Dangers abound in the world of srteet art, however one danger stands out as increasingly dangerous. Gangs around the country use graffiti to mark their terriotory and do not take kindly to street artists. In several parts of los angelos gang members will stop you in the middle of the street and ask you if you have spray paint if you are wearing a backpack or a messenger bag. If you answer in the affirmitive (or if they take your bag and find spray paint or markers) its very likely they will steal your backpack and probably get violent. If you think you are in dangerous territory with gangs, your best bet is to leave as soon as possible and make as little noise as possible. If push comes to shove try to find a cop, its better to get a ticket for having spray paint (with intention to use) than to get shot or beaten.

Gang graffiti is fairly easy to recognize; it usually has little or no artistic value and is simply a way to mark that gangs territory on the street. A few genaral ways to recognize genric gang graffiti are as follows:

Now how to recognize gang tags for certain gangs. 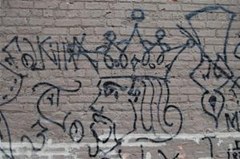 Latin kings: The latin kings are one of the easiest gang tags to recognize, all you have to do is look for the signiture five pointed crown, along with a frequent use of old english lettering. In fact, old english lettering is a common trait among most latino gang graffiti. However it is VERY good to be able to tell the latin king graffiti apart from others, for the simple reason that the latin kings are the second most hostile gang when it comes to graffiti. The have made a reputation for themselves on the streets of L.A. for shooting taggers and writers without even a warning.

Crips: The easiest way to recognize crip (besides just seeing the word crip or somthing) graffiti is the apperance of the six pointed star, much like the star of david. This star represents the six points of the crip lifestyle, but i wont go into detail on that here. Another way is if the b's in the tag are all crossed out, as a way to disrespect the bloods. 187 is also common for crips, The significance of the number lies in the california penal code. In the penal code, 187 is the code for first degree murder. 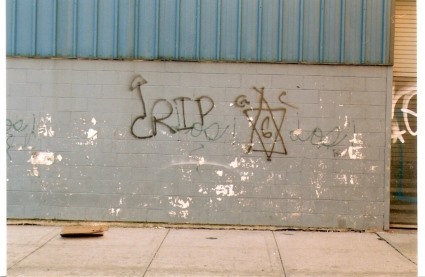 Bloods: Like the crips, the bloods also use a star in their graffiti, but their star has five points again representing the five main points of the blood lifestyle, which i won't go into here. Bloods also cross out the letter C to disrespect the crips, and use the 187 for the same reason as the crips. How creative. Anyway, the bloods are well known as the most violent gang when it comes to graffiti. Policy in most blood crews (although less in L.A. because how outnumbered they are by the crips) is to shoot ant tagger, gang affilated or not, on sight. Of course this doesnt always happen, whether it's because they don't have the stomache to kill so freely or they are worried about getting caught we can't know for sure. But 99 percent of the time you will have your cans and valubles stolen and you will be beaten extremely badly. 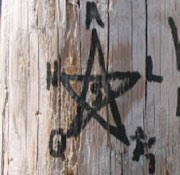 Really interesting. I used to live in Glassell Park (east LA), which has it's fair share of gang graffiti. Wish I had known how to distinguish the different tags at the time.

Thank you the information I got from your article, It will help with my paper.

Cool articles I live in Cleveland Ohio, and I woke up this morning to spray paint on my car it is from a local violent gang should I be worried? ??