The philosophy of street art is a long and complex one. This is just the first in a series of the individual street art philosophys i have come across.

First a quick history/philosophy lesson. The culture of graffiti goes back to the 70's where the first taggers were kids living in brooklyn new york, which at the time looked like WWII berlin. Bombed out and abondend, where landowners would just burn down buildings instead of hiring a construction company to dismantle it. The authorities didnt care about the people, and the people resented a city that had left them in the dust. Not suprisingly the youth didn't feel bad about spraying their name over the city. The essential philosphy of these original taggers can be summed up into two points.

Of course this philosphy has changed alot since the early seventies but some of the points still live on with alot of taggers. Now, alot of the kids living in brooklyn and low income areas were black. So it makes sense that as graffiti became more and more popular it began to infuse itself with other aspects of black culture, mainly black music. Remeber this is before the street art boom in the late ninties, at this time mostly all graffiti is writing,, with the exception of a few individuals. When hip hop came around it was a match made in heaven with graffiti. That pair till exsits to this day, and spread across the globe hand in hand. So alot of the culture of graffiti has come from this black culture and its hip hop music, without hip hop in fact, graffiti would have probably had a considerably slower spread.

By the way, another thing i just want to point out that is that in todays modern world of street art and its growing popularity, there will always be people looking to make money by abusing street art and selling commercially. However, there are alot of street artists who do sell products, but are in no way sell outs. The plain and simple fact is that graffiti is expensive and dangerous, and the artists who create street art need to eat and a house to live in. If they decided to dedicate themselves completely to street art (and quit their day job) they need a way to use street art to make a living. If they aren't famous enough to hold gallery shows, the only way to do this is to sell a product. So please dont ever think for a second that the artists in this article or any future articles that have a brand or sell merchindise are sellouts.

So, saying that last bit, here are some street artists and their individual philosophies.

OBEY: Since the first andre the giant sticker, shepard fairey (who never really even used an alias) was selling stickers and merchandise. He just started slapping the OBEY andre the giant sticker on walls. in this way you couldent really call him a street artist who uses art to make money, so much as a graphic designer with a street art hobby. This dosen't however, stop him from being one of the most recognized and influencial street artists in the world today. And it definatly did not stop him from creating his own personal street art philosophy. 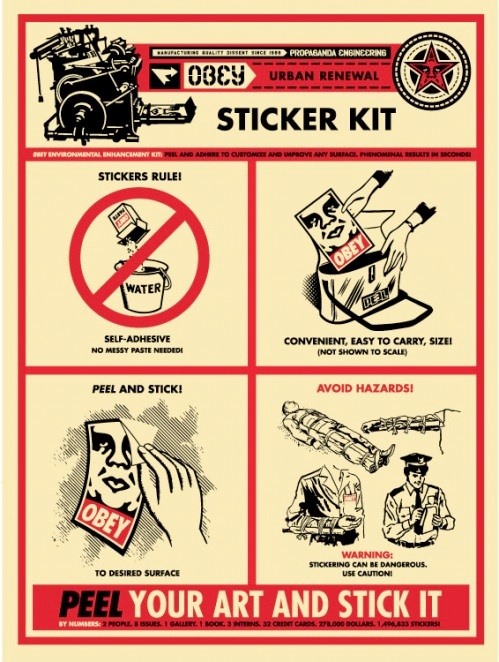 ". . . the more people that see the OBEY icon face poster or sticker the more power it gains. What i mean is that people have this tendency to assume that if somthing like the OBEY face is everywhere, with its almost cryptic look, it must mean somthing. And of course the more there are, the more important it must be, the more it must mean! and it does all this without ever having ment anything to anybody. Only amplified speculation and percived power. . ."

This is an intresting philosophy, and is reminicent of earliar philosophers (none of which i know enough about to quote) who said that all power lies on the repitition of icons. Which means, in a round about sort of way, that iconography (symbols) is the only reason that anybody can have power. For example, according to fairey a cop is only as powerful as the badge he wears. Or, the cop is only as powerful as the idea the badge represents. But even if the law was taken away, the badge will still have power, even if it only percived, because of the idea of punishment or the idea of order and civilization.

Thanks for reading this far if you did. im sorry this article isnt really up to par but i just needed to pubish somthing. Better articles coming soon!

Interesting. @ Henry.. So what's your final take on Fairey? I went to RISD (his alma matter) and the students generally turned their noses up at him. So very commercial, appropriating images beyond a reasonable threshold (Obey being derivative of "They Live" by John Carpenter/the whole Obama AP issue).

As for the art students, there may be a hint of jealousy there, but at the end of the day Fairey seems unoriginal as artist--though a mastermind at self promotion/marketing.

Oh and btw... just came across this trashy TMZ video of him dissing his wife on camera (Doh!)- https://www.youtube.com/watch?v=07tI0S1_qBA

I agree. Many elements you mention are the foundation of any conceptual success, whether graffiti, music, film or tv. Has to be good. Has to be simple. Has to be promotable. Has to be original. And then as the concept gathers popular currency, it commands a larger significance and 'earns' its place in culture.

Well, personally i think saying repurposing images is a tradition in art, especially pop art. Like warhols soup can or lichensteins comics pop art and graffiti seem to like turning popular culture on its head almost.